Regarding our transportation operations, in fiscal 2020, we became certified under the Green Management Certification System established by Japan’s Foundation for Promoting Personal Mobility and Ecological Transportation, under the jurisdiction of the Ministry of Land, Infrastructure and Transport, for promoting environmental conservation in the trucking industry. These actions, combined with the PDCA cycle used in the Groupwide environmental management system, are part of our ongoing efforts to improve the environment.

Note: Regarding CO2 emissions, in principle, the DOWA Group multiplies the amounts of electricity purchased, fossil fuel consumed and waste received by the emission factors stated in the Law Concerning the Promotion of Measures to Cope with Global Warming. Regarding CO2 emissions derived from waste received, because the calculation terms are as of the time this report is prepared, numbers may not necessarily match those reported to government agencies, which are calculated at a different time. In addition, due to differences in the classification of waste in Japan and overseas and to the difficulty in setting an appropriate emission factor for waste received at overseas business sites, only the portion of CO2 emissions originating from waste from domestic business locations is given. Some of the figures stated in this report have also been revised to coincide with revisions of aggregate numbers. 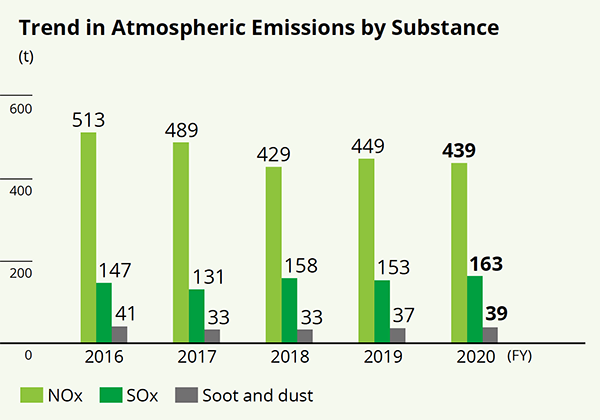 Trend in Atmospheric Emissions by Substance 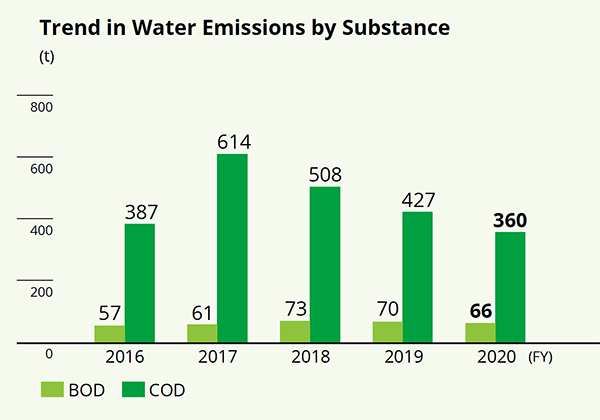 Trend in Water Emissions by Substance

Use of Water Resources

The DOWA Group worked to reduce water consumption via thorough efforts to curtail use, which included changing processes to promote the recirculation of water and installing flow meters. The majority of the water resources used by the Group is seawater that the Nonferrous Metals Business utilizes for cooling purposes. Freshwater comprised 13% of all water use, with use on a par with fiscal 2019, at 13 million m3. 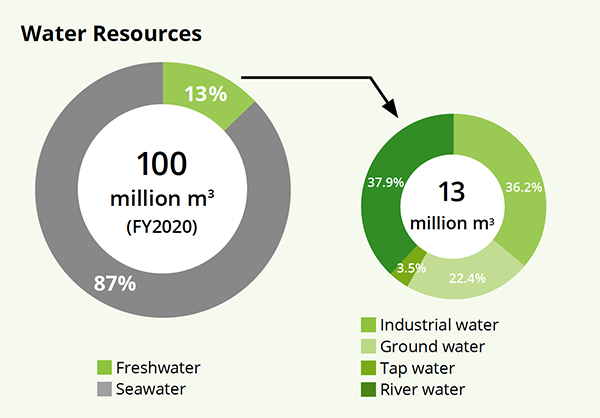 Similar to other water use, the majority of drainage water is used by the Nonferrous Metals Business for cooling purposes. After being checked for quality, this water is returned to its original source.

The DOWA Group is committed to water quality, and its efforts to do so include water management at each business location and compliance with strict, self-imposed standards in addition to drainage water regulations.

Greenhouse gas emissions for the entire DOWA Group in fiscal 2020 decreased approximately 1,695 thousand tons, a reduction of about 5% from the previous fiscal year.

Emissions from electric power and emissions from waste each accounted for approximately 40% of total emissions, whereas fossil fuels accounted for roughly 20% of emissions. CO2 emissions can fluctuate greatly depending on the volume and composition of waste from outside the Company disposed of via incineration. Since it is difficult to control externally generated waste, we are working to prevent global warming by promoting thermal recycling that uses the heat generated during incineration for power generation and steam production. 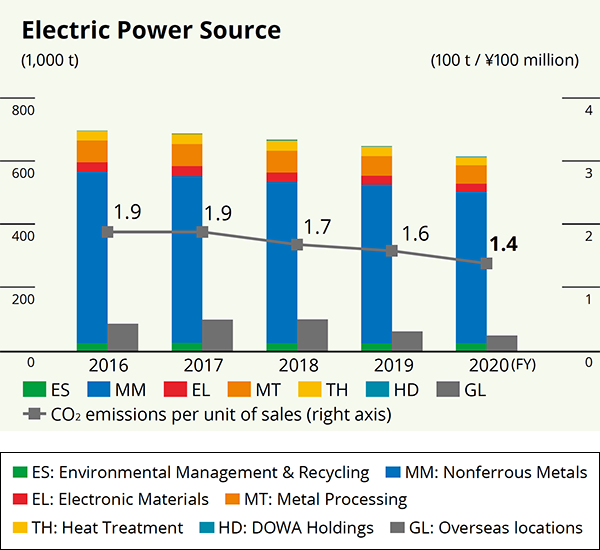 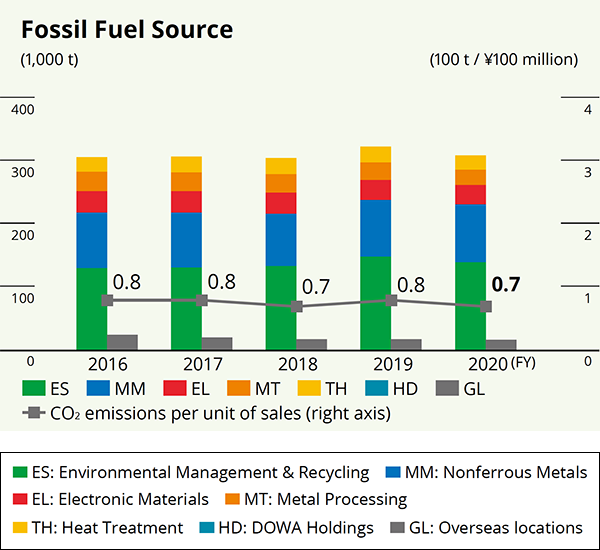 The DOWA Group is working to combat global warming with measures that include using privately generated power derived from renewable energy sources and leveraging its businesses to increase the use of renewable energy.

In fiscal 2020, these plants generated 47.9 GWh of electricity and serve as an important power source for Kosaka Smelting & Refining.

In fiscal 2020, the systems at these five companies generated a total of 388 MWh of electricity, which will either be used for business activities or sold.

Currently, the DOWA Group produces thermal power at five domestic locations and one overseas location, for a total of six. In fiscal 2020, 80 GWh of thermal power was generated.

Thermal power generation involves the use of heat released into the atmosphere to produce high-temperature, high-pressure steam, which turns a turbine to generate electricity. In the case of DOWA, this heat is mainly generated from the incineration of waste. Since thermal power generated in this manner utilizes combustible waste as fuel, it does not require fossil fuels, as is usually the case for thermal power generation. Treating waste with heat is therefore an efficient use of energy because it leads to more energy being produced.

In fiscal 2020, the Company treated 473 thousand tons of waste, a year-on-year increase of approximately 29%. This increase is due to a waste treatment facility being newly included in total figures and to a rise in the amount of contaminated soil treated by the soil remediation business. The amount of in-house waste produced by manufacturing processes (excluding the Environmental Management and Recycling Business) decreased by approximately 4%.